In 1917 the Puget Mill Company, looking for a way to lessen the tax burden of their logged off lands, developed the planned community of Alderwood Manor, Washington. To promote this new community located halfway between Seattle and Everett, they developed a 30-acre Demonstration Farm which included a hatchery, as well as demonstration gardens and orchards. 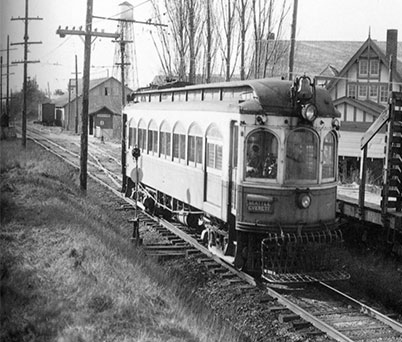 Potential residents came from all over the United States and Canada. Some would arrive on the Interurban Railway that ran between Seattle and Everett. Once on the Demonstration Farm, they would be shown how they could make a living raising chickens on the 5 acres they were considering purchasing. Soon Alderwood Manor was one of the largest egg producing regions in the United States.

For twenty-plus years the community of Alderwood Manor grew. In 1927 Highway 99 was completed just a few miles west of the Alderwood Manor Town Center. As more people traveled this new south/north highway, the area around it was developed. Several events of the 1930s changed this growing community. The effects of the Depression were felt as egg prices dropped. This caused many families to sell their chicken ranches and the Puget Mill Company closed the Demonstration Farm and sold most of it as one-acre “ranchettes.” In October of 1939 the Interurban Railway ceased operations.